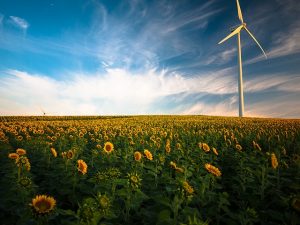 When the cost of clean energy is lower than the cost of dirty energy, the end of the game for the fossil fuel industry will come into view.  And we are getting very close.  For electricity, we are already there.

Wind costs came down to a competitive price over a decade ago.  When Puget Sound Energy built the Wild Horse wind farm near Ellensburg in 2006, their Integrated Resource Plan had found it the least-cost resource, independent of its renewable character.  Nationally and globally, wind power is providing power to utilities in the $.02 – $.04/kWh range.  That is cheaper than any conventional new fossil fuel based electricity resource.  States like Kansas, Wyoming, Texas and Oklahoma, with no particular preference given to renewable energy, are among the biggest wind producing states.

The Pacific Northwest has a good wind resource, particularly offshore (but it’s expensive to develop offshore wind).  But it is not as good as some other places. This map shows wind potential across the country. Most of our wind farms are on ridges above the Yakima, Columbia, and Snake Rivers.  But North Dakota to Texas is the “Saudi Arabia” of wind power.  This means that wind resources also require expensive energy transmission to get the power to where we use it, and this must be factored in.

But wind and solar only produce when the wind is blowing, and the sun is shining.  We need energy storage systems to enable wind and solar to be our primary power generating resources.  The good news is that battery storage costs are also coming down very fast.  Bloomberg New Energy Finance published an annual battery price survey – and costs are down by a factor of 3 since 2014.

Put all of this together, and it means that every US electric utility should be investing in wind, solar, and storage to serve growth, and to replace existing power plants.  Excel in Colorado found the bids for wind and solar so compelling that they bought more than they’d planned, and announced an early retirement of two Pueblo coal-fired stations.

It’s important to realize, however, that utility-scale solar has very different economics than residential or commercial scale solar.  First, the cost of installation is lower, due to economies of scale.  While all solar costs have come down, the compelling advantage is utility-scale systems.  Commercial and residential systems are much more expensive. This cost comparison, from Lazard, a major investment firm, and Lawrence Berkeley National Laboratory, shows the dramatic difference in cost per megawatt-hour (1,000 kWh) between cheap utility-scale solar and very expensive residential-scale solar:

It’s also important to realize that these are all national averages of actual projects (and there are no large solar projects in the PNW).  The Pacific Northwest has excellent wind resources, but not as good as Texas or Kansas.  The Pacific Northwest has good solar potential in Eastern Washington, but not in Western Washington.  A solar panel that produces 8 kWh per day in Nevada will produce more like 5 kWh per day in Olympia.  Put another way, our cost/kWh will be 40% – 80% higher than in sunny areas.

The US Insolation maps shows the differences in solar energy, which translate directly into a difference in solar cost.  The recognition of this regional cost differential, for example, has led Germany (which has about the same insolation as Olympia) to dramatically cut back on its previous strong commitment to solar, in favor of much lower cost wind energy available to them.

kWh Per Day Solar Production in Different Regions of the US

The most important lesson of all: energy efficiency remains, hands-down, the best investment we can make.  Energy efficiency investments, clearly the cheapest option, is also the most reliable option.  It saves power whenever the lights, heating, cooling, or other loads are running – which means it is concentrated in the high-cost peak hours.

Eat your conservation vegetables before you ask for your solar dessert.

We can buy wind, solar and storage to meet our needs, but the first step should be to improve the efficiency of the energy we use, and then work to replace dirty energy with clean energy.