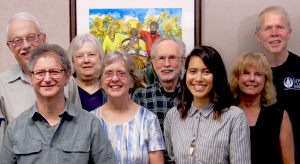 With the U.S. withdrawal from the Paris Climate Accord, and the failure of state government to act on needed climate initiatives, it has become increasingly clear that local communities are called on to make much more progress. For organizations in Thurston County, one of the most promising approaches to doing that is to improve how they communicate with one another, work together, and engage more community members. At the same time, recent events demonstrate the links between climate change and other social justice issues, such as the homeless crisis, income inequality, racial injustice, gun violence, and war.

Improving communication, coordination and collaboration among local groups working on climate change and related issues is part of the Thurston Climate Action Team (TCAT) goals. The project is funded by a two-year foundation grant.

To facilitate communication between organizations, TCAT revamped our website to serve as a platform for resources and a calendar of events, and uses social media and a weekly email newsletter to inform members and the general public about events, hearings and resources available to take action on climate change. We also use this platform, along with regular meetings among group representatives (who have formed a “Coordinating Council”) to share visions, goals and activity plans among the various groups.

Coordination among these groups includes using online tools and Coordinating Council meetings to plan events and activities that do not conflict or overlap with those of other groups. Groups also discuss how to better align their efforts with one another, and present complementary messages to elected officials and business representatives in the community.

The Coordinating Council facilitates collaboration by defining shared goals and identifying a few campaigns or other efforts that several organizations will work on together. Participating groups share resources  and co-sponsor events to ensure the success of these common efforts.

Kick off for the project took place at the third annual South Sound Climate Action Convention, which was held on April 14, 2018, at the South Puget Sound Community College, Lacey campus.